Blending Your Lives and Traditions

What To Include In a Hindu-Interfaith Ceremony 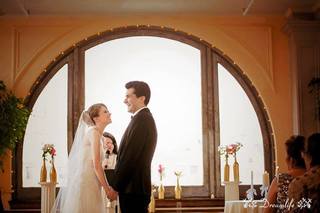 The Hindu ceremony has many components. It is quite beautiful and filled with chanting, Sanskrit blessings and rituals that are thousands of years old. In India or when carried out according to tradition anywhere in the world, it can last days, or weeks. In the west, it typically is at least two hours long.

A Hindu priest, or a teacher/scholar (known as a pandit or pundit), traditionally leads a couple and their families through the sacrament of marriage. However, as an interfaith minister with great affection for, and experience with, Hindu culture and worship, I've am regularly called upon to officiate Hindu Interfaith ceremonies that include these rituals and prayers.

When a Hindu bride or groom marries a non-Hindu, they often wish to honor their heritage and families in a way that is sacred and meaningful, and yet simpler and shorter. While Hindu parents are often concerned about the loss of the traditions they grew up with, many understand that when their son or daughter marries someone of another faith it may require a compromise–either having two ceremonies too represent both faiths, or one ceremony that embraces both.

Over the years I have come to specialize in creating a blended wedding rich in Hindu rituals that also include traditions from the other partner's faith and family.

I've officiated Hindu-Jewish, Hindu-Catholic, Hindu-Muslim and Hindu-Buddhist weddings, to name a few, as well as a Hindu-Christian African American wedding where the couple walked around the sacred fire and jumped the broom. One or both partners may choose to wear traditional Indian garments, or they may opt for a tux and white dress.

I've been pleasantly surprised over the years to see how amenable families are to allowing me to adapt and blend rituals. I have learned so much from family members who have helped with the preparation of ritual items and have taken the time to explain the proper way to honor — and spiritually choreograph — their family customs. To make sure everyone feels included and represented, I regularly involve the parents in meetings to review the script and rituals, as well as ask them to partake with everything from lighting the sacred fire to offering prayers and being part of the ceremony.

Here are some of the most important elements to consider:

Family traditions. There are universal components in the Hindu ceremony, yet each region in India has different local customs and each family may pray to different gods and goddesses. Ask your family about specific regional traditions. Also, you may want to give parents a chance to offer a traditional blessing within, or just prior to, the ceremony.

Creating a sacred space. One way to honor tradition is to have the ceremony under a four-pillar canopy, and raised platform called a mandap, which represents a temple. While traditionally the couple sits on thrones or pillows, interfaith couples usually stand at the altar. However, they often invite their parents to sit in chairs in the mandap. While florists can configure the structure with flowers, I've often seen them lovingly decorated by moms and aunties who want to create the sacred space for the couple. One dad pre-built a beautiful wooden mandap for the couple that the mom covered with gold material and ribbons.

Lighting the sacred fire. A key aspect of the Hindu ceremony is to light a scared fire, usually created from ghee and woolen wicks, to evoke the God, Agni (Fire), to bear witness to the ceremony. I often ask a dad, brother, or uncle to create the sacred fire. One family wanted to use coconut oil and so the bride's father tended the fire through the whole ceremony. In a pinch, we use a votive in a traditional brass holder.

Garland Exchange. During the ceremony the couple exchanges fresh garlands, welcoming each other into each others families. I like to make it one of the first gestures in an interfaith ceremony. It is a lovely way to establish a connection between the couple and their loved ones.

The Seven Sacred Steps. The highlight is Saptapadi, also called "The Seven Steps." Traditionally, the bride's sari is tied to the groom's Kurta (tying of the knot), or a sari shawl might be draped from his shoulder to her sari. He leads, often by her pinkie linked with his pinky, in seven steps around the fire, as the priest chants seven blessings or vows for a strong marriage. By walking around the fire they are agreeing to these vows. With each step, they throw small bits of puffed rice into the fire, representing prosperity in their new life together. This is considered the most important part of the ceremony, as it seals the bond between the couple forever.

A nice way to adapt this into a creative, contemporary ceremony is to light a traditional fire, or a candle, placed on a small table in front of the wedding altar and guide the couple as they take seven steps while seven blessings are spoken in English.

Although this is a ritual that originated for a male and female couple, it can easily be adapted for same-sex ceremonies. I recently married two brides who decided to walk together, hand in hand, one equal to the other. It was beautiful and meaningful to both families.

Here are Seven Blessings adapted from a Hindu ceremony.

These can be timed and spoken, as the couple walks around the fire.

Some couples end their ceremony with a blessing from the family. Most likely, in the modern interfaith wedding, the couple will end on a kiss!

In some cases, couples decide to have an interfaith ceremony in addition to a traditional Hindu wedding puja. Sometimes it is the same weekend as their western wedding, but more often they will arrange a ceremony at a later date, with friends and family in India — or wherever the family hails from. These are presided over by a Hindu priest or traditional officiant.

What Kind of Ceremony Do You Want?
Today's wedding ceremonies can be creative, fun and very personal.
Selecting the Right Officiant
To have the perfect ceremony, find the right officiant.
Why Your Parents Might Be Upset
When parents reject your selection of mate.
How to Get Your Marriage License
What you need to know about getting your license in NYC
How to Write Wedding Vows
Take the stress out of vow writing
Prepare For the Walk Down the Aisle
Tips for an easy journey down the aisle
A Blessing Over Your Hands
Many cultures bless the hands of bride and groom
Honoring Lost Loves Ones
Remembering the ones who have passed on
How to Kiss On Your Wedding Day
However you decide to do it on the big day, have fun practicing.

Stress-Busters for Brides
Tips for staying sane while planning your wedding
Creative Marriage Contracts
Written spiritual agreements to enhance your marriage
Why We Love Weddings
The bride and groom are the eternal lovers, helping us all believe in the power of a good relationship